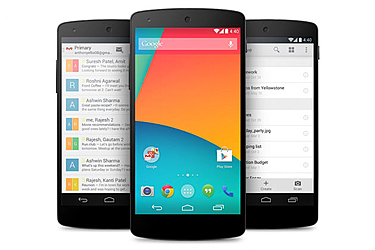 The Google Nexus 5 is the best smartphone ever.

Hello dear friends! Back in 2013, after using the flagship 2011 Samsung Galaxy S 2 for two years and launching various new products in the “smartphone industry”, I realized that my faithful digital friend is out of date and my soul is desperately demanding something new.

The search for the ideal ended with a friend acquiring LG's Nexus 5 from LG. After listening to her enthusiastic reviews, turning it in her hands, playing with a “clean” and convenient interface, she herself did not notice how she became the owner of this miracle. There are no headphones for you, only a guide for use, a key for a SIM slot, and here is such a charger.

@ 123 @
I will not bore you with lists of technical specifications and explanations of what the Nexus line is. You can easily find it on the Internet. I will say the following - this is, in my opinion, the most successful smartphone model in the last five years. And unlike other flagships, the price is very affordable. I bought it for 18,000 rubles, a cover cost me 800 rubles (I had to look for it). Now it costs about 24,000, due to the fact that last year it was discontinued, but by popular demand, it was reissued by a limited party.

As I said earlier, the smartphone is assembled by LG, under the control of Google. There are three colors white, red and black. And two versions of 16 and 32 GB of internal memory. My choice fell on black, with 16 GB. There is no slot for a flash card, but this is absolutely not a problem. I listen to music through VK, or services from Google, for example Play Music. The rest of the media entertainment (video, pictures) is also on the Internet, or stored in the "cloud". The built-in memory is used to store books, applications and pictures taken on the camera. Not crowded even once.

About the camera I want to say separately. But there is nothing special to say. 8 mPix, there are several shooting modes, good color reproduction. There are few settings, but this is not a professional camera - right? And that is quite enough. Here are examples of screenshots and screenshots of the camera interface. It seems to me pretty not bad.)))

@ 123 @
During the use of the smartphone, there were no malfunctions on the part of the hardware component. Only not significant "lags" of the applications themselves due to the "crooked" developers, but with OS updates. But always with updates. While they fix, finish, polish. But there are no complaints about the smartphone itself. It works and pleases.

By the way, about OS updates. Since this is a Nexus, I get one of the first updates. Bought with Kit-Kat 4.0, recently received Marshmallow 6.0. As they say - a trifle, but nice. )) And the names in honor of sweets, and the "Easter Egg" as a gift. Google can cheer you up. )))

The battery is not that powerful, but you cannot call it weak either. Software optimization of the OS, plus proper use (for example, turn off Bluetooth, Wi-Fi if not using) give a relatively long battery life. With moderate use (listening to music, surfing the Internet, reading, sitting on VK), I have enough for a day. But he used to live longer, but what do you want? After all, almost two years.

Body. Well, you can’t name him the peak of design thought, but I like it. It is made of plastic. The assembly is excellent, nothing crunches, does not crack. The front part is “glass”, the back has a pleasant to the touch matte finish, ceramic power and volume buttons on the sides. SIM card slot. Lightweight, thin and comfortable in the hand. Despite its size.

Of the minuses. Pretty fragile. Two friends, the fall of their N5, from a small height ended in broken displays. I was more fortunate. It got off with a couple of cracks in the case, and scratches on the display. Which without a protective film, I dare to notice, and still looks neat. ))))

@ 123 @
In general and in general, I am satisfied with the smartphone. Never failed, many times helped out, saved from boredom and became a source of access to information. I will not exchange for anything, even for Nexus 6. And if you ask me “which smartphone to buy”, the answer is definitely Google Nexus 5.

~ Brand new glass iPhone 8 in silver. Unlike previous models, and in particular from the iPhone SE. Examples and photo comparison! Should I buy this model? ~about 1 monthMobile phones

On the eye and the ruler is more accurate than with this template.about 1 monthEquipment repair

Chinese airpods Airplus for 3000 rubles. The best analogue of Remax.4 monthsAccessories for equipment

Inexpensive camera with powerful functions for those who do not want to pay for the brand. Review from a consultant of the cellular interior. (Lots of PHOTOS)4 monthsMobile phones